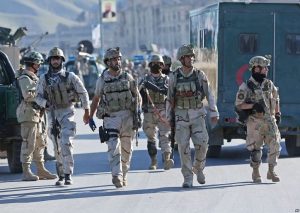 Taliban’s coordinated attack on Jaghato district of central Maidan Wardak province, was strongly retaliated and repulsed by the brave Afghan police forces, an official said according to afghanistantimes.af.

Police Spokesman, Naqibulla Amini told Pajhwok Afghan News the insurgents initially detonated a car bomb and then launched an offensive on the district centre at midnight.

Amini addded the attack was repulsed after a five hours fierce clash, during which the militants suffered heavy casualties, he said, adding two Afghan soldiers were also lost their precious lives.

He added at least 30 rebels were killed in retaliatory action by security forces. But the number of casualties was not so far confirmed by Taliban.

On the other hand, Taliban’s spokesman Zabihullah Mujahid said the Taliban have destroyed a tank and inflicted casualties on several security personnel in Syedabad district.