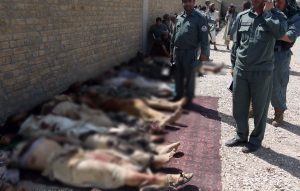 At least thirty Taliban insurgents were killed after suicide attack vests exploded prematurely among the gathering of Taliban militants in western Farah province of Afghanistan, like reported by khaama.com .

According to the local government officials, the incident took place on Thursday in the restive Bala Bolok district.

He said a number of the senior Taliban commanders were also among those killed.

According to Mehri, several Taliban insurgents had gathered in a meeting in a village to discuss plans for a coordinated attack on the security posts when the incident took place.

This comes as the Taliban-led insurgency has been rampant during the recent months as pressures on the rise in the battleground and on international level to restrict the group’s activities and freedom of action they have in their sanctuaries in the region.