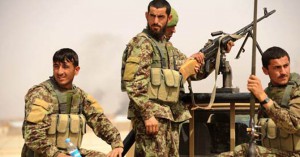 At least 30 militants have been killed and many others wounded in clashes between Taliban and Daesh in eastern Nangarhar province, officials said on Wednesday.

Attaullah Khogyani, the governor’s spokesman, told Pajhwok Afghan News 18 militants including two IS commanders, Ajmal and Abdul Ahad, were killed and four others wounded on Wednesday in the 4th Farm area of the Batikot district.

Similarly, a Taliban commander was among five fighters killed in another firefight in the Maidanak area of Achin district on Tuesday night, he said. Four Taliban and seven Daesh fighters were wounded.