You are here: Home / West Asia / Afghanistan: 3 women working in polio drive gunned down by Taliban 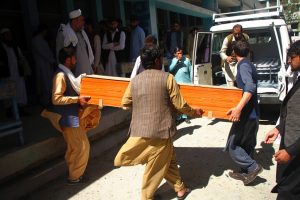 Attackers on Tuesday gunned down three women working to administer polio vaccine in eastern Afghanistan, officials said, a day after authorities launched a new campaign against the crippling children’s disease, like reported by stripes.com.

The women were killed in two separate attacks in Jalalabad, the capital of Nangarhar province. Fared Khan, spokesman for Nangarhar police, said two were shot and killed in police District 7 and the third in District 4.

According to an official from the governor’s office, local media were reporting that no arrests have been made so far in the case. The official, who was not authorized to talk to the media, spoke on condition of anonymity.

No one immediately claimed responsibility for the attack, but eastern Afghanistan has witnessed an increase of attacks by the Islamic State group. IS militants have declared war on Shiites and frequently target the country’s minority Hazaras.

The government on Monday launched another round of polio vaccinations across the country, aiming to inoculate 9.6 million children under 5 years of age. The polio drive came after 54 new cases of polio were reported in 2020, the highest number on record since the fall of the Taliban in 2001.

UNICEF Executive Director Henrietta Fore said the U.N. children’s agency “is outraged” at the attack and paid tribute to the three “courageous vaccinators who were at the forefront of efforts to combat the spread of polio and keep Afghanistan’s children safe from this disabling disease.”

She said “frontline health workers should never be a target of violence” and stressed that UNICEF remains “committed to supporting polio eradication efforts in Afghanistan.”

According to the United Nations, Afghanistan and neighboring Pakistan are the only two countries in the world where polio is still endemic, after Nigeria was last year declared free of the wild poliovirus. With an increase in the number of polio cases during the last three years, the battle to eradicate the disease has become a pivoting challenge for Afghanistan.

Most of the vaccination campaigns across the country are conducted by female health workers, who can gain better access to households and mothers and children in a door-to-door effort.

Earlier this month, the Islamic State group claimed responsibility for killing three women who worked for a local radio and TV station, also in Jalalabad. Mursal Wahidi, Sadia Sadat and Shahnaz Raufi had left work together and were killed in separate attacks while on their way home.

Meanwhile, many other attacks have gone unclaimed. The government blames most on the resurgent Taliban, who today hold sway over nearly half the country. The Taliban, in turn, deny any role in some of the attacks and blame the government.