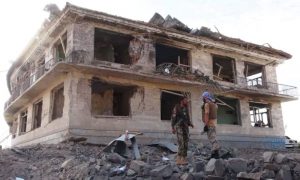 Three security force members were killed and 11 wounded when insurgents detonated a car bomb at the gate of a public protection forces compound in Gardez city, in Paktia province early Tuesday, like reported by ariananews.af.

A brief gun battle ensued before two attackers were killed by security forces.

Among those wounded and hospitalized is a woman, officials said.