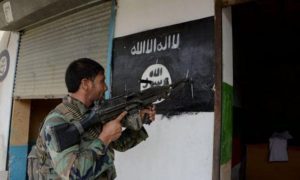 At three members of the Islamic State of Iraq and Syria Khurasan (ISIS-K) were killed in an airstrike in Haska Mina district of Nangarhar province, like reported by khaama.com.

The provincial government media office in a statement said Sunday that the airstrike was carried out by the U.S. forces using unmanned aerial vehicles, drones.

The statement further added that the ISIS Khurasan group members were targeted in Shinkai and Sheikh Qala areas of the district.

A number of light and heavy weapons belonging to the terror group were also destroyed during the airstrike, the provincial government added in its statement.

The Afghan forces also discovered and defused two improvised explosive devices planted by the militants in Behsud and Kuz Kunar districts, according to the local officials.

Nangarhar is among the relatively calm provinces in East of Afghanistan but the anti-government armed militants including ISIS and Taliban militants are active in some of its districts and often attempt carry out terrorist related activities.