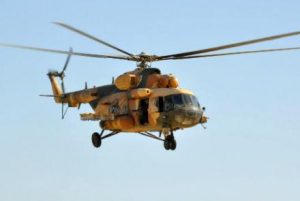 In addition, six other insurgents were wounded.

The airstrike was launched a day after Taliban insurgents took control of the district from security forces.

“Soon we will launch a military operation to re-capture the district,” Jamshidi said.

However, he did not provide further details.

On Monday, local officials said that at least 60 security force members were under siege by the Taliban in the district.

Kohistan district fell to the Taliban early Sunday after heavy clashes between security forces and insurgents.

“Thirty army special forces, 20 soldiers and 10 national policemen have been surrounded by the insurgents in Khair Abad village which is 1.5 kilometers far from center of the district since yesterday,” a spokesman for the provincial governor, Abdul Karim Youresh said Monday.

“The clashes still continue in the area and the Taliban have told the tribal elders that if the security forces do not surrender to them, they will kill them all,” Youresh said.

He said that 130 residents who were helping security forces in their battle to hold off the Taliban had surrendered to the insurgents. However, their commander managed to escape and fled to Ghor after the district’s collapse.