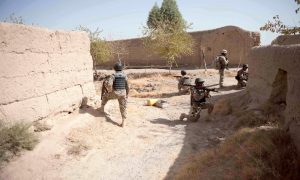 At least 13 Taliban militants were killed and 12 others wounded in clashes with Afghan security forces in southern Kandahar province, police confirmed according to ariananews.af.

Jamal Nasir Barikzai, a spokesman for Kandahar police told Ariana News that the Taliban fighters attacked security outposts in Zherai and Takhta pul districts of the province on Tuesday which faced resistance by Afghan forces.

The militants stormed a security outpost in Zherai at around midnight Tuesday, in which at least 8 insurgents were killed and three others injured, Barikzai said.

He added that one policeman was killed and another was wounded in the shooting exchange.

Meanwhile, at least five Taliban fighters were killed and 9 others wounded as the group attacked a security outpost in the Bedak area of Takhta pul district on Tuesday night, Barikzai said, adding no security forces were harmed in the clash.

In a separate incident, the Taliban militants attacked an Afghan army outpost in Taluka area of Kunduz city on Tuesday, as a result, five soldiers were killed and 7 others wounded, a source said.

The spokesman for the provincial governor confirmed the attack but did not provide further details on casualties.

The Taliban militant group yet to make a comment about the attacks.