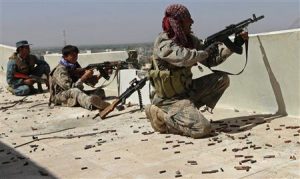 At least 23 Taliban attackers were killed during an hours long battle with Afghan National Army (ANA) troops in southern Kandahar province, an official said Saturday according to pajhwok.com.

He told Pajhwok Afghan News dozens of rebels attacked on the ANA and police posts in the district late on Friday night at around 1:00am.

The ensuing clash left 23 assailants and four ANA personnel dead. Some bodies of the rebels remained at the scene.

Reinforcements had reached the area and the situation was no under control, he concluded.

The Taliban have not yet commented about the incident.

Durrani said civilians suffered no casualties in the operation that also resulted in confiscation of one rocket, one Kalashnikov and two motorbikes belonging to the rebels.