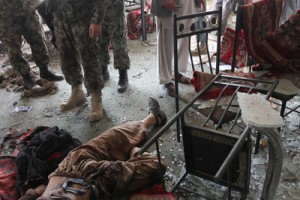 A gunfight at a wedding party in northern Baghlan province of Afghanistan left 22 people dead and another 13 injured including children, officials said on Monday.

The gunfight broke out between two illegal armed groups, attending the wedding, in Deh Salah district of Baghlan late on Sunday night.

A music party was under way in Sheshan village, when members of the two armed groups started shooting each other as result of a verbal dispute, Baghlan Police Chief, Jabar Pardaly, told Afghanistan Times.

Another police official, who preferred anonymity, said most of the killed persons are members of the two armed groups, but at least eight local residents were also killed in exchange of fire.

A number of children were also among the victims, who were in party for watching music party.

The injured participants of wedding were shifted to hospitals and were now out of danger and the dead bodies were today morning returned to their relatives, official said.

Armed groups, being backed by warlords and commanders, deteriorated security situation in dozens of Northern provinces. Most of the armed men justify having arms by saying they were defending their areas against Taliban militants.

The district, where incident happened, has been one of the calm districts, but illegal armed groups were active there, a member of the Wolesi Jirga or Lower House of the Parliament, who wished anonymity, told Afghanistan Times.

“The illegal armed groups are more dangerous to social security of our people and government must disarm them, otherwise will be wetness of more such deadly incidents” he said.

Two days back, suspected armed men, belongs to Taliban, kidnapped 11 civilians in Dandi Ghori district of Baghlan and who were still in captivity.

However despite, local people for months criticized and asked government to disarm illegal armed groups, but government was unable the MP said.