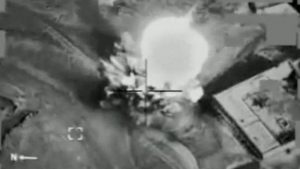 At least 21 Daesh (Islamic State) militatns have been killed as a result of a drone strike in the Khogyani district of eastern Nangarhar province, an official said on Monday according to pajhwok.com.

He said 21 rebels were killed and several weapons, ammunition and hideouts were destroyed during the airstrike. Civilians suffered no casualties. Daesh has not yet spoken about the strike.