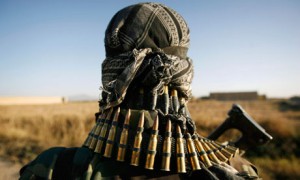 Two soldiers have embraced martyrdom while 26 insurgents killed during separate military operations across the country in past 24 hours, according to information released this morning, according to Khaama.

According to a statement issued by the Ministry of Defense two soldiers from Afghan National Army embraced martyrdom due to bomb blast and insurgent fires.

The statement does not contain information about the exact location on the incidents.

Also, 26 insurgents were killed during separate security forces operations in eight provinces in past 24 hours, according to local officials in Kandahar and Ministry of Interior statement.

Some 90 percent of the raw material used in manufacturing heroin is reportedly supplied to the world by the conflict-ridden Afghanistan.

At least 36 different types of Improvised Explosive Devices (IEDs) were also discovered and defused by the security forces in past 24 hours, according to the statements.

In the meantime, Ministry of Interior states in a statement issued this morning s that 26 insurgents According to the statement 34 insurgents were also wounded and six others arrested by security forces.

IEDs are considered one of the biggest threats to security forces as well as civilians in Afghanistan.