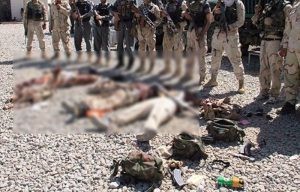 At least 19 Taliban insurgents were killed in separate operations in southern Helmand province of Afghanistan, the Ministry of Defense (MoD) said Tuesday according to khaama.com.

According to MoD, at least 14 of the militants were killed in Greshk district and 10 others were wounded.

MoD further added that 5 militants were killed in a separate operation conducted in Garamser district and a vehicle of the militants was destroyed.

T he United States announced last week to deploy around 300 soldiers in this province to train, advise and assist the leaders of the Afghan National Army.

The decision by US Marines to deploy forces to Helmand comes as the province has been witnessing firece clashes during the recent months as the Taliban group attempted take control of the strategic parts Helmand as part of their deadly spring offensive.

According to the Afghan officials, the Taliban group attempted to shift some of its leadership to Helmand BT seizing control of the strategic Lashkargah city and other key districts.