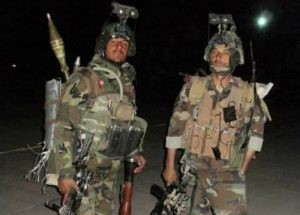 At least 19 militants were killed during clashes with the Afghan security forces in southern Helmand province of Afghanistan, like reported by khaama.com.

The provincial government media office in a statement said the Taliban militants launched a coordinated attack on security posts in Sangin district late on Monday.

The statement further added that the attack was repulsed by the Afghan forces, leaving 19 dead and around 24 others wounded.

According to the local officials, additional forces of the Afghan National Army (ANA) commando were deployed to Sangin late on Monday night and the security situation has further improvement with the deployment of the forces.

No further details were given regarding the possible casualties of the Afghan security forces during the clashes.

The Taliban militants group has not commented regarding the clashes so far.

Helmand is among the volatile provinces in southern Afghanistan where the Taliban insurgents are actively operating in a number of its districts and often carry out insurgency activities.

This comes as reports emerged during the recent months suggesting that some of the Taliban’s senior leaders have shifted to Helmand as they attempt to seize further parts of the province.