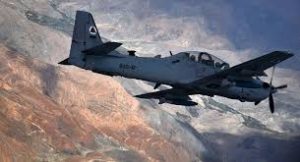 At least 17 foreigner fighters have been killed and nearly a dozen more wounded in an airstrike in northeastern Badakhshan province, an official said on Tuesday according to pajhwok.com.

The intelligence official, who wished anonymity,  said A-29 aircraft of the Ministry of Defense (MoF) pounded hideouts of the foreign terrorists in Khastak locality of the Juram district. He said the rebels had been using the house of Almas Khan as military corps headquarters.

Ahmad Javid Mujadidi, a member of the provincial council and resident of Juram district, confirmed the killing of one individual and wounding of four others in the airstrike.

Local officials said some 50 families of foreign militants have been living in Juram district.