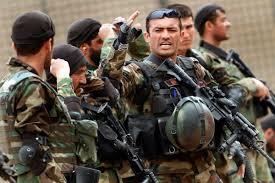 At least 150 Taliban insurgents were killed in a large-scale military operation in eastern Nangarhar province in the past month, local officials said on Monday.

In addition, more than 100 other insurgents were injured.

The operation was named “Musalas-e-Ahaneen” in which 13 security soldiers were also killed and three others injured, Mohammad Zaman Waziri said.

The military officials said that the insurgents gathered across the border and come into Afghanistan with the intention of destabilizing the country.

“We have destroyed all Taliban bases in Hesarak and Sherzad districts of the province and the Taliban insurgents had massive casualties in the month’s operation,” said Waziri.

The military soldiers, who have since returned to their bases, said the “Taliban insurgents created problems for residents in these areas. We were sent from different provinces to rescue our people.”

“I have fought the Taliban insurgents face-to-face and the people,” a soldier Ahmadullah said.

Another soldier, and resident of eastern Kunar province, Mustafa said that “the Taliban created problems for the people. I have killed a number of Talibs and as long as I am alive I will rescue my peoples from them.”

Meanwhile, the Provincial Police Chief, Fazal Ahmad Sherzad, said that a number of police posts have been established along the Nangarhar highways.

“Sherzad borders with Pakistan so because of this the Taliban activities are more frequent and we have created a number of police posts to prevent insurgent attacks,” Serzad said.

The operation was a joint campaign with police, military and the National Directorate of Security (NDS) and conducted in three districts of the province.