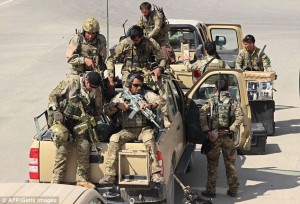 150 Taliban militants have been killed and 90 others wounded in the operation launched against Taliban in Kundoz.

A statement released by the Ministry of Defense on Thursday morning states that Afghan security forces backed by air support launched operation to push back Taliban from Kundoz province.

The statement adds that besides strict resistance from militants, the operation has been successfully going on.

Security forces entered Bala-e-Hisar around 07:00 am this morning and also captured Pul-e-Rahmat Khan. There were no civilian casualties, the statement states.

The operation continued by the time this report was filed but according to the Ministry of Defense press release there was no resistance by Taliban.

After launching a coordinated attack, Taliban took the control of the city on Monday evening.

Taliban stormed several government compounds including the jail from where they set free around 600 prisoners.

At least 100 of them were detained on terrorism charges.