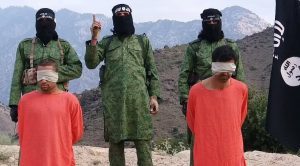 At least fifteen militants affiliated with the Islamic State of Iraq and Syria (ISIS) terrorist group offshoot, ISIS Khorsan, were beheaded by their own comrades in eastern Nangarhar province of Afghanistan, like reported by khaama.com.

According to the local officials, the incident took place recently in the restive Achin district.

The provincial government media office in a statement the incident took place in Surkhab Bazar area of Mamand Dara in Achin.

The statement further added that the ISIS fighters beheaded their 15 comrades after an infighting erupted among them due to unknown reasons.

According to the provincial government, the beheading of the fifteen men has resulted into a major crack among the ISIS ranks in this province and there are fears more violence and infighting among the group.

Nangarhar is among the relatively calm provinces however the Taliban and ISIS militants have increased their insurgency activities in some its remote parts during the recent years.

This comes as several militants loyal to the terror group were killed in the latest airstrikes conducted by the US forces based in Afghanistan.

The 201st Silab Corps of the Afghan military in the East said the latest airstrikes were carried out in Deh Bala district of Nangarhar province.

The Silab Corps officials are saying that the hideouts of the terror group were targeted by unmanned aerial vehicles in Payin area of the district.

The officials further added at least ten ISIS militants were killed in the airstrikes but no casualties were incurred to the local residents or security personnel.