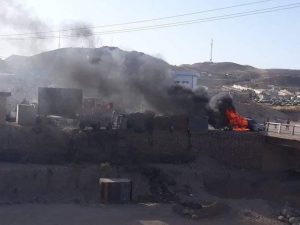 At least 14 people were killed on Tuesday morning when the vehicle they were traveling in hit a roadside bomb, like reported by ariananews.af.

The explosion happened in Kariz village in Kajran District, the Ministry of Interior confirmed.

The incident happened at about 9am. Seventeen civilians had been in the vehicle at the time of the explosion.

Those killed include seven women, five children and two men, officials confirmed. Three others were wounded.

A sharp rise in violence has been detected around the country in the past two months, with a marked increase in the use of IEDs by the Taliban – which largely affects civilians as they are planted along public roads.

Afghan security forces have however been detecting and defusing hundreds of these explosive devices around the country each week – putting their own lives at risk to do so.