You are here: Home / West Asia / Afghanistan: 13 killed, 120 wounded in car bomb attack in the western province of Ghor 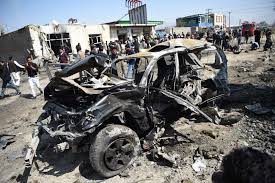 A car bomb has killed at least 13 people and injured another 1-hundred-20 in Afghanistan.

The government said on Sunday that terrorists blew up a car full of explosives in the western province of Ghor.

Some government offices and shops were also destroyed.

So far, it is unclear who is responsible for the attack or what they were targeting.

This comes amid continuing violence in the region,despite the recent peace negotiations between the Afghan government and the Taliban.

The Afghan government said last week that more than 2-hundred-50 people had died from Taliban attacks in the previous 15 days.