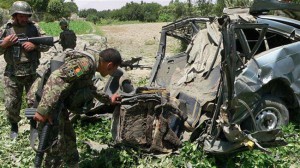 10 militants have been killed in two separate airstrikes in eastern Nangarhar province.

The airstrikes have been conducted in Lal Pur District since yesterday.

Hazrat Hussain Mashriqiwal, spokesman for the police headquarters of Nangarhar province says that one attack was carried out in Samso area leaving seven insurgents killed around 02:00 PM yesterday.

He said a “Saracha” vehicle in which three militants were traveling was targeted the second attack leaving all three on board killed.

Two of the three killed are identified as Sharifullah and Shirzad but the identity of the third one is unknown.

Also, security forces in Jalalabad city have arrested Kochai alias Sangarai who was the shadow district governor of insurgents in Surkh Rod District.

Mashriqiwal says that Kochai had brought a vehicle for maintenance in Jalalabad city when security forces detained him.

Another person by the name of Zarwali who was accompanying Kochai was also arrested in the raid.