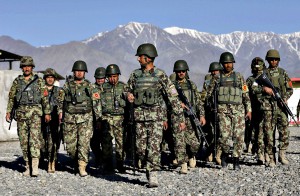 At least 10 villages in the Aqtash area of Khanabad district in Kunduz province have been cleared of Taliban, officials said Thursday.

Kunduz police chief Abdul Saboor Nasrati, said that troops on Wednesday started clearing out the insurgents in Basos and Kuhna Qala in Aqtash. He said in total ten villages had been cleared of Taliban.

During the clearing operation 10 Taliban were killed and five others were wounded, Nasrati said.

The clearing operation is still on going, Nasrati added.

This comes after Taliban insurgents reportedly seized control of as many as 80 villages on Monday night in northern Kunduz province, officials said.

Afghan security officials believe however that the war increased in the north and east of the country after insurgent groups came over the border from Waziristan in Pakistan.

Concerns have however been raised over why Afghanistan did nothing to prevent the problem after Pakistan military forces launched an operation to clear insurgents from Waziristan.