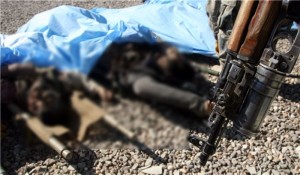 At least 10 militants belonging to the loyalists of the Islamic State of Iraq and Syria (ISIS) terrorist group and Lashkar-e-Islam were killed in separate operations in eastern Nangarhar province of Afghanistan, according to khaama.com.

The provincial police commandment in a statement said at least 2 ISIS loyalists and 5 Lashkar-e-Islam militants were killed in a US drone strike in Achin district on Friday.

The statement further added that a commander of the group identified as Qazi Shahid was also among those killed.

At least 3 ISIS militants were killed during a clash with the security forces in Haska Mina district, the statement said, adding that the clash broke out after the ISIS militants ambushed the Afghan forces in Ghalani area.

The anti-government armed militant groups including the ISIS loyalists have not commented regarding the report so far.

Both the Afghan and US forces conducted regular strikes against the loyalists of the terror group in this province.

The increased raids, usually involving drone strikes, by the US forces followed a broader role granted by the Obama administration earlier last year.

The broader role was granted amid concerns that the loyalists of the terror group are attempting to expand foothold in the country and turn the eastern Nangarhar province into a regional operational hub for its fighters.