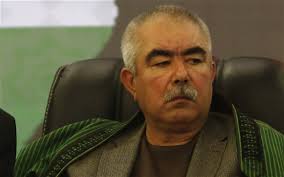 A Taliban ambush on Afghan Vice-President Abdul Rashid Dostum’s convoy backfired on Friday when the war-hardened leader’s men fought back, killing at least four militants and capturing a dozen more on a remote highway.

Dostum, an ethnic Uzbek who led a personal army fighting the Taliban regime before the 2001 US military intervention and who is accused by rights groups of involvement in war crimes, joined the political mainstream last year as President Ashraf Ghani’s running mate.

He traded the new suit for a military uniform last month to accompany the army and armed villagers fighting an offensive by the hardliners in his northern heartland.

Dostum’s armoured vehicle was moving in a convoy along a remote highway in the province of Faryab when 20 militants opened fire, said police chief Subhan Qul, who was in the convoy. Dostum’s vehicle was hit several times by shots in the gunfight that followed, Afghan media reported.

“As a result of almost three hours of fighting at least four Taliban are killed and 13 are captured alive,” an official from Dostum’s media office said. Earlier a spokesman said eight militants died. There were no initial reports of casualties among the security forces.

Afghan forces are largely fighting the Taliban alone for the first time this year after all but a rump of foreign coalition soldiers left the country last year.