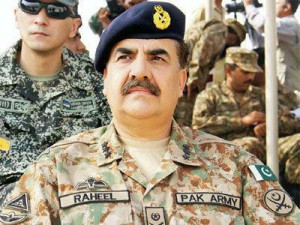 Pakistan’s powerful army chief has said that ongoing efforts at talks between the Afghan government and the Taliban are the “only credible way” to bring peace to the region.

Negotiators for the two sides met in the Pakistani hill town of Murree last month for their first face-to-face meeting aimed at ending the Taliban insurgency, now in its 14th year.

A second meeting planned for last Friday was cancelled after the death of Taliban supremo Mullah Omar was announced, throwing the movement’s leadership into upheaval.

Backing from the Pakistan and in particular its military, the Taliban’s historic sponsors, has been seen as crucial in getting the militants to the negotiating table.

“Referring to ongoing peace talks between Afghan government and Afghan Taliban, COAS said it is the only credible way to achieve lasting peace,” a statement from the military released late Tuesday said.

While Kabul remains keen to pursue the talks, the Taliban’s attitude has become ambiguous as the movement deals with an increasingly acrimonious power struggle.

Mullah Akhtar Mansour was announced as the new head of the insurgent movement Friday but several members of its top leadership including Omar’s family have rejected him.

On Tuesday the head of the Taliban’s political office, opened in Qatar in 2013 in a bid to foster talks, resigned in protest at Mansour’s appointment.

The Afghan presidency said Omar’s death meant the grounds for the discussions were more solid now than before, but many of the insurgents’ ground commanders have openly questioned the legitimacy of the Taliban negotiators.

Moreover, before confirming Omar’s death, the Taliban distanced themselves from peace talks, saying they were not aware of any such process.