You are here: Home / West Asia / Afghan Taliban seek ‘to establish an Islamic state on earth’ 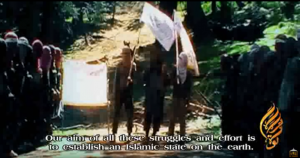 In a propaganda video that promoted its Al Farouq Training Camp, the Taliban said that the ultimate goal of its jihad is “to establish an Islamic state on earth.” The Al Farouq camp is the latest training site publicized by the Taliban, like reported by longwarjournal.org .

The video, entitled Ribat 1 and released on Voice of Jihad on Jan. 20, was produced by Tora Bora Jihadi Studio and the Multimedia Branch of the Cultural Commission of the Islamic Emirate. “Ribat” is defined as a base or fortress used to defend Islam.

The location of the Al Farouq camp was not disclosed by the Taliban; it could be located in either Afghanistan or Pakistan. The makeshift camp (there are no permanent structures seen in the video) is situated on a wooded hillside. An improvised range and obstacle course are shown during the course of the video.

The first half of the video is standard fare for Taliban training camp videos: an estimated 20 recruits are shown exercising and practicing with various weapons, including handguns, assault rifles, and machine guns. A group of 12 fighters are in what appears to be the camp uniform: a red keffiyeh, woodland camouflage uniforms, and new white high top sneakers.

The Taliban fighters are operating in the open in broad daylight, without fear of reprisal from US, Afghan, or Pakistani forces.

The video is clearly geared toward a Western audience. Clips of the fighters training are subtitled with English-language captions such as The Training Madresa, The Center of Understanding Jihad, The School of Developing Minds, The Training Center of Mujahid Nation, Defending the Divine Way, and The Address of Jihadic Thinking.

The second half of the video features an unknown speaker who provides religious justification for jihad, which he calls a “holy obligation,” based on readings from the Koran. His entire speech is subtitled in English. The speaker then reaches out to “other Muslim brothers,” a clear reference to non-Afghans, to take part in jihad.

“We also have a responsibility to invite other Muslim brothers to take part in waging jihad with their blood and souls,” the Taliban speaker implores.

The Ribat 1 video, like a previous video entitled Real Men that also promoted a Taliban camp, contradicts many of the group’s public statements and claims that it  only seeks to liberate Afghanistan from Western occupation. In Real Men, the Taliban’s message clearly indicated that it is a fervent defender of Islam and part of the global jihad.

In Ribat 1, the Taliban could not be more explicit about its support of the global jihad. At one point, the speaker said the Taliban’s ultimate goal is the establishment of a global Islamic state.

“Our aim of all these struggles and effort is to establish an Islamic state on earth,” the speaker said.

This should come as no surprise as the Taliban has often revealed its close relation to global jihadist groups, such as when it publicly accepted a pledge of allegiance from al Qaeda’s emir, Ayman al Zawahiri.

The Taliban has publicized at least 10 of its training camps since the end of 2014 (see list below). Other jihadist groups, including al Qaeda, are known to operate camps inside Afghanistan. In 2015, the US raided an al Qaeda camp in Bermal district in Paktika, and two others in the Shorabak district in Kandahar province. The outgoing commander of US forces in Afghanistan, General John Campbell, said that one of the camps in Shorabak was the largest in Afghanistan since the US invaded in 2001. Al Qaeda has also operated camps in Kunar and Nuristan.

Harakat-ul-Mujahideen, a Pakistani jihadist group that is closely allied with al Qaeda,“operates terrorist training camps in eastern Afghanistan,” the US government stated in 2014. The Turkistan Islamic Party, the Islamic Jihad Union, and the Imam Bukhari Jamaat, an Uzbek jihadist group that operates in both Syria and Afghanistan, have all claimed to operate camps inside Afghanistan. Coalition forces have also raided Islamic Movement of Uzbekistan suicide training camps in Samagan and Sar-i-Pul.

Training camps promoted by the Taliban since Dec. 2014