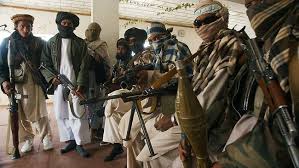 BBC citing informed sources says that the new Taliban force is called ‘Reserve Units’ which has been formed in eastern provinces of Afghanistan.

According to these sources, the new Taliban force is training young people to fight with Daesh.

The report further states that the new force has been provided more equipment than other Taliban fighters.

Some residents of eastern Kunar and Nooristan province have said that those youths who have been frightened by the arrival of ‘Daesh’ joins the new Taliban force.

The propaganda team of Taliban are provoking villagers against ‘Daesh’ to stand with them ‘Taliban’, the report adds.

BBC has also questioned the Taliban spokesman regarding the new force. Mujahid has responded BBC’s question with: “yes, there is a force like this”

Mujahid names the force as ‘Defense Units’ saying that they shows reaction to whoever standing against the Islamic Emirate.

Most of the members of Daesh militant group which emerged in Afghanistan about 9-10 months before are members of the Afghan and Pakistani Taliban groups.

The group urged Taliban to join them but they refused. Now they have been fighting against each other which has resulted in the death of hundreds of militants from both sides.