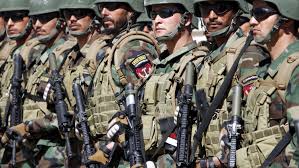 As Afghan soldiers and police struggle to contain an escalating insurgency that has targeted several cities in recent weeks, the country’s special forces are being tested as never before.

Trained in counter-insurgency tactics at the elite School of Excellence near Kabul, these soldiers led the battle to retake Kunduz, after regular forces fled their posts last month to cede the northern city to militants they easily outnumbered.

“The credit for the Kunduz victory goes to the Afghan special forces of the police and Afghan National Army,” said interior ministry spokesman Sediq Sediqqi, referring to the government’s recapture of most of Kunduz a few days after it fell to the Taliban in late September.

“They are tough fighters.”

Events surrounding the first capitulation of a provincial capital to the Taliban since they were ousted from power in 2001 underlined the weakness of Afghanistan’s regular army and police and the relative strength of its special forces.

Worryingly for Kabul and the United States, which has spent around $65 billion training local forces to allow the rest of its troops to withdraw, Afghan special forces are feeling the strain.

Numbering about 18,000 of a total Afghan National Security Force of up to 350,000 and divided between the army, police and Interior Ministry, Afghan special forces units and commandos undertook 2,800 independent operations in the year to May 2015, according to a report from the U.S. Department of Defense.

“Our forces shoulder a lot of responsibility and sometimes they have to respond to attacks as often as twice a day,” said Abdullah Guard, head of police special forces in Kunduz.

“WE WILL LOSE EVERYTHING”

With better equipment, training and pay, as well as more prestige than regular troops, special forces are the first units turned to in a crisis.

That burden was bothering Afghan special forces commanders even before the dramatic events in Kunduz.

Since then, heavy fighting has flared near Ghazni, a city 130 km southwest of Kabul, and, in the last few days, around Lashkar Gah in the south, Herat in the west and in the northern Faryab province bordering Turkmenistan.

Some commanders are concerned that too much reliance is being placed on units originally intended to provide specialized back-up to regular security forces.

“Commandos are not being used in the way they were supposed to be,” one Afghan commander complained to a team of U.S. special forces at a remote outpost in Paktia province, close to the Pakistan border where the Taliban have long been active.

“They’re being used like a conventional unit,” he added at a meeting this summer convened for the benefit of a visiting U.S. special forces commander. The Afghan officer declined to be named, because he was not authorized to speak to the press.

“If they continue to use commandos like a conventional force, we won’t get any new recruits and we will lose everything that we have.”

As training has been handed from U.S. to Afghan instructors, there have been complaints from some officers that the quality of recruits has fallen.

“When we get them, we have to teach them everything from the beginning,” the Afghan commander said.

As international forces step back from active combat, the dynamic between U.S. and Afghan special forces units has shifted, with American soldiers leaving most of the fighting to local colleagues.

“We’re not going out as much as we used to, and that’s a good thing,” said one U.S. special forces adviser.

The Americans’ main role, according to command sergeant major James Napolet, NATO Special Operations Command Component-Afghanistan, is to support Afghans where their resources are weakest, including intelligence and medical evacuation.

NATO’s 13,000-strong Resolute Support force is there to “advise and assist” after the main combat mission, numbering 130,000 soldiers at its peak, ended last year.

In the heat of battle, lines between Afghan and foreign special forces can become blurred.

On Oct. 1, U.S. advisers working alongside Afghan special forces came under attack from Taliban fighters in Kunduz and returned fire, which a NATO spokesman said was within their remit to “protect themselves if necessary”.

The U.S. military has taken responsibility for the bombing of a hospital in Kunduz that killed 22 staff and patients, which it said came in response to an Afghan request for air support.

Earlier this month, General John Campbell, commander of U.S. forces in Afghanistan, hailed one of the biggest ground assaults his forces had conducted, targeting al Qaeda cells in Kandahar province in the south.

While a statement did not specify the involvement of special forces, the operation was the kind carried out by elite commandos.

“I couldn’t be prouder of our brave U.S. servicemen and women and their Afghan counterparts,” Campbell said. “It’s because of their extraordinary efforts that terrorists here haven’t been able to attack our homeland in over 14 years.”