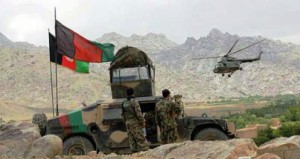 Taliban insurgents armed with heavy and light weapons launched the assault on Maimana from three directions yesterday and engaged in intense gun battle with security forces.

The clash continued until this morning and finally Taliban stepped back who are now about 20 kilometers away from Maimana.

According to Abdul Baqi, seven members of a single family were killed and wounded in the clash.

Taliban have begun a new wave of attacks in northern Afghanistan and try to capture large areas from government.

They have been able to occupy districts briefly but lose them back to security forces with heavy casualties.

They recently attacked the key northern city of Kundoz and had several areas under control for about two days.

According the Ministry of Defense, security forces have pushed back insurgents from Kundoz city but clearance operation still continues.