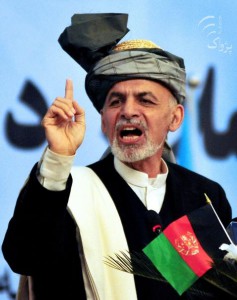 After his country’s capital was rocked by a series of suicide bombings either side of the weekend, Afghan President Ashraf Ghani vented his frustration on neighboring Pakistan.

Three back-to-back attacks on Friday killed more than 50 people and wounded 400 others while another on Monday, outside the Kabul airport, killed five more.

Afghanistan has long accused Pakistan of controlling the Taliban but Ghani had been largely kept quiet on the issue since taking office last September as he attempted to build better relations with Pakistan.

“However, Pakistan still remains a venue and ground for gatherings from which mercenaries send us messages of war,” said Ghani in a message on Monday which was later re-published in a series of tweets. “The incidents of the past two months in general and the recent days in particular show that the suicide training camps and the bomb making facilities used to target and murder our innocent people still operate, as in the past, in Pakistan.”

Ghani directly asked Pakistan to image an opposite scenario and whether they would consider Afghanistan “friends of enemies” if similar attacks had happened in Pakistan by militants operating from Afghanistan.

“We hoped for peace, but war is declared against us from Pakistani territory; this in fact puts into a display a clear hostility against a neighboring country,” he said, claiming that Pakistan’s next steps would define ties between the two neighbors for coming decades.

Ghani’s power-sharing partner, the Chief Executive Abdullah Abdullah, took a similar tone. Addressing a cabinet meeting, said Pakistan had not changed its policies towards Afghanistan despite an unprecedented outreach from Kabul, which included Ghani directly engaging with the Pakistani military leadership.

He also repeated the claim that the meeting to elect new Taliban chief Mullah Akhtar Mansoor, after the revelation of founder Mullah Omar’s death, was held in Pakistan.

Pakistan later responded to Ghani and Abdullah’s claims by saying it “is committed to maintaining good neighborly relations with Afghanistan.”

“Pakistan condemns these deadly attacks in Afghanistan in the strongest terms. We stand shoulder to shoulder with our Afghan brethren in their hour of grief,” said a statement from Pakistan’s foreign office.

Security expert and former Afghan Air Chief General Atiqullah Amarkhail told Anadolu Agency that the series of attacks in Kabul was linked to a split within the Taliban over the choice of Mullah Mansoor as the new leader.

“They aim to prove that despite cracks in their ranks they can still pose a grave threat to the government and inflict heavy damage,” he said.

Amarkhail added that the Taliban’s new wanted to divert attention away from the internal divisions and make it clear that the Taliban wanted to enter any peace talks with the government from a position of strength.