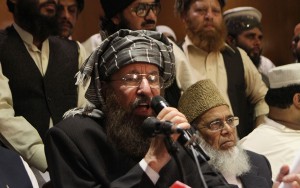 The Afghan government held talks this week with the Taliban in an attempt to work toward a peace process for the war-ravaged nation, officials said.

The Afghan government described the meeting as “the start of the first ever official peace talks” between the two sides.

U.S. and Chinese officials also attended the discussions Tuesday at a hilltop resort in Pakistan.

“The participants agreed to continue talks to create an environment conducive for peace and reconciliation process,” the Pakistani government said in a statement Wednesday.

The next meeting is expected to take place after the end of the Muslim holy month of Ramadan.

With U.S. encouragement, Afghan President Ashraf Ghani had been seeking dialogue with the Taliban.

“This is an important step in advancing prospects for a credible peace,” White House Press Secretary Josh Earnest said of the meeting in Pakistan.

But it remains unclear how far the talks might progress.

As U.S. and other NATO troops are drawing down their numbers in Afghanistan, the Taliban insurgency continues to rage across wide areas of the country. The militants attempted a brazen attack on the national parliament last month.

The Afghan Foreign Ministry said Wednesday that it hoped the talks “would be a starting point for the process so it could prevent the shedding of more innocent Afghans’ blood and further destruction of the country.”

The U.S. combat mission in Afghanistan ended last year, leaving the Afghan military to lead the fight against the Taliban. The thousands of NATO troops that remain in Afghanistan are there in a training and support role.

“The United States has been encouraging the Afghans to participate in an Afghan-led process that would bring about a political reconciliation in Afghanistan and a deescalation, if not an end, to the violence that has wracked that country for more than a decade now,” Earnest said.

Analysts have suggested that the Taliban may want to delay formal peace talks in anticipation of a stronger negotiating position down the line.

Previous contacts between Afghan government and Taliban representatives, notably in the Middle Eastern nation Qatar, have failed to bear fruit.