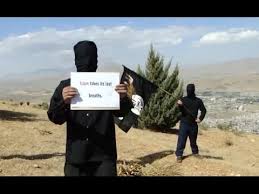 At least three times a week, Malaika hikes up the mountain, past mulberry and pine trees, to a clearing where she can get cellphone reception. She calls her family to reassure them that the Islamic State fighters have not come for her yet.

Below, her village — Bagh, in the Maamand Valley in eastern Afghanistan — has been gutted by the Islamic State militants who overran it three months ago. Most of the houses have been looted, burned or simply taken over by the fighters, and the 80 or so families that lived there have been forced to seek refuge near Jalalabad city.

Malaika, vigorous in her late 50s, is one of three women who decided to stay behind to try to keep their homes.

“The poor woman is guarding the windows and the planks of the two rooms that remain,” her husband, Mullah Jan, said last month. Mr. Jan was held by the militants for two months until he paid them $500 ransom. “We had 10 goats and one cow. They took all of it.”

When reports began emerging last year that some Afghan militants had shifted their allegiance to the Islamic State, also known as ISIS or ISIL, the government and international response remained measured. Experts noted that in Afghanistan, the Islamic State represented more of a splintering of the Taliban than a major expansion of the core group out of Syria and Iraq.

But even as the Taliban are winning major victories against the government this year, including the capture of Kunduz, they are not exerting monolithic control. The Islamic State has made major inroads in turf battles against Taliban commanders, particularly in places in Nangarhar Province like the Maamand Valley. And the result, rather than weakening the overall insurgency, has mostly been to inflict more chaos and misery for Afghan civilians.

The people in eastern Afghanistan were not sure what to make of it at first. To them, the shaggy-haired militants were largely the same old Taliban under a new black flag.

But one big difference soon became obvious: The fighters were suddenly flush with cash. Rumors circulated that they were paying a signing bonus of $400 to $500, a persuasive offer in a country where a lack of job prospects has helped fuel a new wave of youth emigration.

In a series of quick strikes, the Islamic State fighters began driving out local Taliban units, and officials say the splinter group now has a clear foothold across several districts in eastern Nangarhar Province, in rugged terrain on the border with Pakistan that had long been mostly out of government control.

The fighters may mostly be former Taliban, but they appear to have wholeheartedly taken up the calculated cruelty that the Islamic State has become known for, consolidating their hold with a brutality that has been shocking even by the standards of the Afghan insurgency.

Residents say that as soon as the jihadists would take a village they immediately began rounding up anyone even glancingly associated with either the government or the Taliban, including tribal elders. Many were summarily executed, including one group that was massacred en masse in a bomb detonation captured on video.

The provincial deputy director for the Refugees and Repatriation Ministry, Ewaz Khan Basharat, said initial data showed that more than 17,000 families in Nangarhar had been displaced by the new group’s violence. Other officials and tribal elders estimate that the number is much higher.

Some of the worst atrocities have been reported in Achin District, where the Maamand Valley and Malaika’s village, Bagh, are located.

The raiders demanded that villagers in the district submit a list of widows and unmarried girls. In some parts, they declared that marriages that had happened under government recognition were suddenly invalid, according to Zaiullah Amaray, a member of the Nangarhar Provincial council. At first, women were allowed to leave the house in burqas, but then were told not to leave at all.

“They said, ‘If anyone has young women or widows, we want to marry them off,’” recalled Aslam Jan, 60, who finally fled Achin this summer after decades of weathering every intrusion to come through. “The Russians invaded, I didn’t leave my home. The Americans invaded, I didn’t leave,” he said. “We had held up through everything. But we couldn’t give up our children.”

Early one evening in Bagh, Islamic State fighters marched dozens of elders up a mountain, where most of them remained captive for two months on charges of helping the Taliban and trying to rally a fight against the Islamic State.

About two weeks in, 10 of the prisoners — including Malaika’s brother-in-law, Mohamed Younus — were taken to a lush hillside. More fighters arrived on horseback and began digging a large trench that had been lined with explosives. The prisoners, hands tied and eyes covered, were herded in.

Their last moments, and the aftermath of the explosion that killed them, were captured by the militants’ video cameras from at least three angles. Two fighters can be seen igniting a long fuse at each of its ends before running out of the frame. A huge blast sends flesh and dirt flying against the camera lenses.

The Islamic State brutality in Achin was so extreme that some local Taliban commanders surrendered to the government, and some moved their families to displacement camps in government-controlled areas.

One man there, Laal Zaman, 55, said he had been with the Taliban “from the beginning.” But he insisted that his cell of the insurgency remained very local, his guns strictly aimed against foreign military forces. Even as he fought the international coalition, he said, four of his sons served in the Afghan Army in the country’s south.

Now, Mr. Zaman says he is doubly a target for the Islamic State: for being Taliban, and for having sons who are soldiers.

Before they got bogged down in a fight for territory with the Taliban, the Islamic State militants had pushed through four districts in no time to reach the gates of Hisarak, a strategic district that shares a border with Kabul Province. Up to 27 small groups of local Taliban had pledged allegiance to them, increasing the number of Islamic State fighters to as many as 1,100, according to official estimates.

But the Taliban soon realized the scope of the threat and began rallying more than a thousand fighters from adjacent provinces, in addition to their estimated 4,200 fighters in Nangarhar. A Taliban spokesman admitted to being challenged in some districts of the province.

The United States military also started taking action. Acting on intelligence provided by the Afghan spy agency, the National Directorate of Security, American drones targeted areas held by the Islamic State in as many as 21 operations since July, killing around 300 fighters, including several of their senior commanders, according to Afghan officials.

The regional branch of the group, called the Islamic State in the Khorasan, an ancient name for the region that includes Afghanistan and Pakistan, does not yet seem to have much coordination with the main group’s leadership in Iraq and Syria, officials say.

Many of the regional movement’s leaders have a history of shifting allegiances in a long insurgency, their move to the Islamic State banner just another change of flags, though one that has brought with it a manual of scorched-earth terrorist tactics and banditry.

Many of the leaders of the Islamic State in the Khorasan, including the group’s supreme commander, Hafiz Saeed Khan, are former members of the Pakistani Taliban from the tribal areas of that country. Mr. Saeed, along with his fighters, moved across the border into Afghanistan after Pakistani forces waged an offensive in the tribal areas this year.

The most prominent of Mr. Saeed’s Afghan deputies is Abdul Rahim Muslim Dost, a 55-year-old former poet and essayist with an extremist past. Mr. Muslim Dost, who lived most of his life in Pakistan, was detained by the security forces there soon after the Sept. 11, 2001, attacks, officials said. He was accused of having ties to Al Qaeda, and the United States military sent him to the prison camp at Guantánamo Bay, Cuba. He was released in 2005, and joined the Pakistani Taliban before defecting to the new Islamic State branch.

In a video pledging allegiance to the Islamic State’s leader and self-declared caliph, Abu Bakr al-Baghdadi, Mr. Muslim Dost said he had seen a vision of the Islamic State while he was imprisoned at Guantánamo. He dreamed of a palace with a large closed door, which he said was “the house of the caliphate.” Above the door was a clock that pointed to the time: 12 minutes before 12 o’clock.

“It came to my mind that the caliphate would be founded after 12 years, God willing,” he said in his pledge. “This interpretation of my vision was made real.” (nytimes)