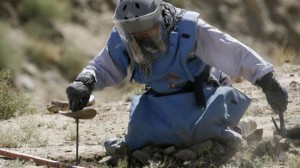 At least 19 de-miners who were abducted by militants of the Haqqani terrorist network were rescued by the operatives of the Afghan intelligence, wrote Khaama.

The National Directorate of Security (NDS) said the hostages were freed on Tuesday by the intelligence operatives.

The de-miners were kidnapped by the militants from Gardez city of Pakia province, according to NDS.

This comes as the local officials had earlier said the de-miners were kidnapped from Zurmat district following an attack by the unknown gunmen.

The officials further added that four vehicles and other equipment belong to the de-mining organization were also taken by the militants.

Paktia is among the relatively volatile provinces in eastern Afghanistan where anti-government armed militant groups are actively operating.

Kidnappings which takes mainly on highways have become more common in Afghanistan besides growing insurgency by the Taliban militants and insurgents belonging to the other militant groups.

The kidnappings have sparked fears among the people who are travelling on highways.

In the meantime, at least 31 people who are mostly Hazaras are still missing after they were kidnapped by the militants from Zabul province in February.