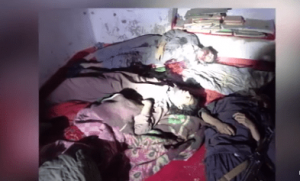 Afghan intelligence operatives have killed 21 members of the Pakistan-linked Haqqani Network including five key commanders of the group, the agency claimed in a statement according to ariananews.af.

“Five key commanders of the Haqqani Network were killed and three others arrested during a special operation conducted by the NDS special units over a large terror hub of the Haqqani network in Nerkh district of Maidan Wardak province,” the National Directorate of Security (NDS) said.

The five key members of the group were identified as Qari Hamidullah also known as Qurishi, Qari Nudrat, Qari Nasratullah, Mawlawi Ghulam and Qari Hamza who was the intelligence chief of the group in the province.

According to the statement, at least another 16 members of the group were also killed during the raid.

“During the operation, a center of the enemy was destroyed and a large number of weapons and ammunitions were also seized,” the statement added.

The Taliban group has not made a comment about the report yet.

The Haqqani Network, a major Taliban subgroup, is based in Pakistan’s tribal agency of North Waziristan, and operates in eastern, southeastern, and central Afghanistan. Afghan and U.S. officials believe that the Haqqani Network is supported by Pakistan’s military and Inter-Services Intelligence (ISI) directorate.

The Network has carried out a series of high-profile terror attacks in Afghanistan killing hundreds of people including government employees and civilians.