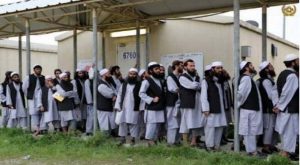 The Afghan government plans to release 900 more Taliban prisoners on May 26, as a cease-fire by the militants enters its third and final day, like reported by rferl.org.

The break in fighting, which came into effect on May 24 to mark the Muslim holiday of Eid al-Fitr, was for the most part holding out across the country, officials said.

The government earlier responded to the Taliban’s cease-fire offer by announcing plans to release up to 2,000 militant prisoners.

“There is a decision to release 900 today,” National Security Council spokesman Javid Faisal said on May 26, adding that the precise number could vary subject to legal procedures.

If completed, it would be the biggest group of Taliban prisoners freed so far.

The 100 Taliban prisoners were released from Bagram, north of Kabul, on May 25 as “a gesture of goodwill to advance peace efforts, including an extended cease-fire and the immediate start of direct talks” with the militants, Faisal tweeted.

Faisal posted photos of the freed militants inside a bus.

In February, the United States and the Taliban signed an agreement aimed at ending the longest military action in U.S. history. The deal lays out a timetable for the withdrawal of U.S. troops from Afghanistan in return for security commitments from the Taliban.

It also stipulates that Kabul must free 5,000 Taliban prisoners, while the militants are to release 1,000 captives — a move expected to lead to intra-Afghan negotiations.

President Ashraf Ghani said the government was also ready to hold peace talks with the Taliban, seen as key to ending a nearly two-decade-long war.

The latest release of Taliban prisoners brings to 1,100 the number of militants freed since early April, an official at the National Security Council told RFE/RL, while the militant group has freed 245 security personnel, civil servants, and other people it had been holding.

U.S. Secretary of State Mike Pompeo has welcomed the cease-fire but warned that the freed Taliban fighters should not return to the battlefield.

The U.S. special envoy to Afghanistan, Zalmay Khalizad, described the cease-fire as “a momentous opportunity” to accelerate a stalled U.S.-Taliban peace process.

“Other positive steps should immediately follow: the release of remaining prisoners as specified in the U.S.-Taliban agreement by both sides, no returning to high levels of violence, and an agreement on a new date for the start of intra-Afghan negotiations,” Khalizad wrote on Twitter.

The prospect of direct talks between Kabul and the Taliban gained a boost on May 17 when Ghani and his political rival, Abdullah Abdullah, reached a power-sharing agreement nearly eight months after disputed elections that led to a parallel government and hampered efforts to broker a peace deal.

The United States has about 12,000 troops in Afghanistan. Washington pays about $4 billion a year to maintain the Afghan military.

Taliban militants control about half of Afghanistan’s territory and have continued to carry out attacks since the deal was signed.

Afghan intelligence service spokesman Javid Faisal said on May 23 that at least 146 civilians were killed and 430 wounded in Taliban attacks during Ramadan.