You are here: Home / West Asia / Afghan forces rescue 8 soldiers from the Taliban captivity in Wardak 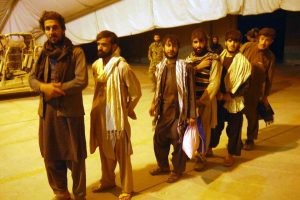 The Afghan forces have rescued eight soldiers from the Taliban captivity during an operation conducted in central Maidan Wardak province of Afghanistan, like reported by khaama.com.

The 203rd Thunder Corps of the Afghan Military in the Southeast in a statement said the operations were conducted in the vicinity of Daid Merdad district.

The statement further added at least 65 militants were killed and at least 15 others sustained injuries during the operations.

The Afghan forces also arrested three militants during the same operations, the 203rd Thunder Corps added in its statement.

In the meantime, the Thunder Corps says at least eight Afghan soldiers who were kept as hostages by the Taliban militants were also rescued during the operations.

The anti-government armed militant groups including Taliban have not commented regarding the report so far.

Maidan Wardak is among the relatively volatile provinces in Central parts of the country where the Taliban militants are actively operating in some of its districts.

This comes as the Afghan armed forces are busy conducting counter-terrorism operations in Maidan Wardak and other restive parts of the country.