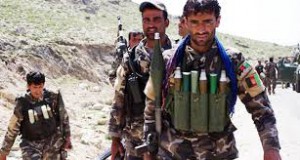 Afghan forces have halted the advance of Taliban militants in Uruzgan’s capital Tarin Kowt after the Taliban threatened to overrun it on Thursday.

He said reinforcements had arrived and the Taliban had been beaten back in their advance and had taken huge casualties, but he didn’t elaborate on the number of casualties.

“We have not been able to get out of the market and our shops are closed,” said a shopkeeper, who didn’t want to be named.

He said he could hear gunfire and blasts going off in the distance, but he was “too afraid” to go out.

Jan Agha, a resident in Uruzgan, earlier said that Afghan police had been fleeing their posts without fighting after the Taliban issued an amnesty letter to government employees in Uruzgan on Wednesday.

Security responsibilities in the province were handed over to Afghan forces in December 2013 when Australian troops ended their combat mission there.

Uruzgan is one of the most volatile provinces in southern Afghanistan, with anti-government militants actively operating in a number of its districts and often carrying out attacks.

In a major coup for the militants, the Taliban briefly took over Kunduz city, the capital of the northern Afghan province of the same name, in September 2015.