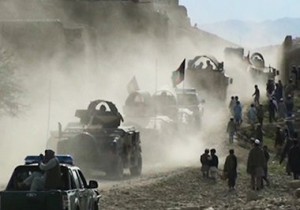 The district is considered as the main stronghold of the terrorist group in the region.

Security officials in the province said that they will expand their offensive against Daesh to other districts of the province.

Officials said that security forces have destroyed the main military base of the group and have seized a large number of weapons.

“Daesh rebels were executing and prosecuting people in this military base. Now, they have lost control over most of the area,” said Zaman Waziri, the commander of Selab 201 Military Corps.

Nangarhar police chief, Fazel Ahmad Sherzad, said that a large number of Daesh rebels have also been killed in the district.

“Police, army and public uprising groups will jointly work to safeguard the district,” he added.

Nangarhar governor, Salim Khan Kunduzi, asked internally displaced people from Achin district to return to their homes. He said that schools and hospitals will soon be reopened in the district.

Meanwhile, residents of the district urged the government not to let Daesh rebels return to the district.

A resident from the district said that foreign militants enter from across the border. The resident also said Daesh had planned to fight Pakistan, but then they started brutalizing locals.

Afghan security forces have been fighting Daesh militants in Achin district for the past eight months. Security officials said that they have killed around 1,000 Daesh rebels during this time.