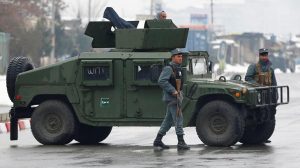 Afghanistan’s intelligence agency said it had broken up a joint cell of ISIS and Haqqani Network militants who carried out the deadly raid on a Sikh temple in Kabul and other recent attacks, like reported by thenational.ae/.

Five militants were killed and eight others arrested when security forces stormed two hideouts of the cell, one in Kabul and the other outside the capital, the National Directorate of Security said in a statement.

“This joint cell of Daesh and Haqqani Network had carried out major attacks in the capital, including an attack on a Sikh temple in March,” the NDS said.

At least 25 people were killed when gunmen stormed the temple in Kabul on March 25 as worshippers were offering morning prayers.

The attack was claimed by the Islamic State in the Khorasan (IS-K), the Afghan branch of ISIS.

The ISIS-Haqqani cell was also behind a rocket attack in Kabul during the swearing-in ceremony of President Ashraf Ghani, the intelligence agency said.

Members of the cell had also killed several Afghan officials and fired rockets at Bagram, the US military’s largest base in Afghanistan, the NDS said.

Afghan officials have long accused the Haqqani Network, a US-designated terror group with ties to the Taliban, of carrying out major attacks claimed by or blamed on IS-K.

“There is undeniable evidence showing a strong link and co-operation between the Haqqani Network and ISIS,” a senior security official said.

“They jointly plan and carry out terrorist attacks, especially in Kabul.”

Late last year, Afghan officials said IS-K had been completely defeated in Nangarhar, a key eastern province where it had first sought to establish a stronghold in 2015.

“If they are now caught side by side in the same trench as the NDS says … this could be an alarming development,” said Atiqullah Amarkhail, a former Afghan army general turned security analyst.

“It may indicate that even if the Taliban one day agrees to reduce or end violence, the actual violence perpetrated by more radical groups like Daesh and Haqqanis may continue.”

The Taliban dismissed as “propaganda” the NDS statement that the Taliban-affiliated Haqqanis were working with IS-K.

“We strongly reject this propaganda. We have nothing in common with Daesh,” Zabihullah Mujahid, a spokesman for the group, said in a text message to reporters.

The United States and the Taliban signed a landmark deal in late February that lays the groundwork to end Afghanistan’s war.

American and other foreign forces pledged to quit Afghanistan within 14 months of the February 29 deal signing, provided the Taliban stick to several security guarantees and hold talks with the government.

A key tenet of the US-Taliban accord is that the Taliban will not allow groups like Al Qaeda and ISIS to use Afghan soil to plan attacks against the US and its allies.