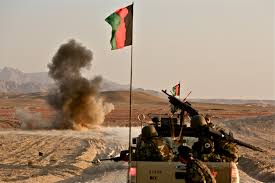 Afghan conflict has left 86 Taliban militants dead and 87 security personnel either killed or missing over the past three days in the militancy-plagued country, officials said Sunday.

According to a statement of Helmand provincial government, 86 Taliban insurgents have been killed over the past 48 hours in the restive and poppy growing province.

“Afghan forces during ground and air operations have killed 86 rebels throughout the troubled Helmand province over the past 48 hours,” said the statement.

It said 26 militants have been killed during air sorties against Taliban hideouts in Nan Ali district over the past 48 hours, while the remaining 60 more insurgents have lost their lives in districts Nahr-e-Saraj, Nawa and other parts of the besieged province.

Several Taliban commanders are also among those killed in the ongoing crackdown against militants in the province.

The statement, however, failed to say if there were casualties on the government forces.

Taliban militants who are in control of some districts and have been fighting to overrun Lashkar Gah the capital of the poppy growing Helmand province, are yet to make comment on the situation.

Meanwhile, an Afghan soldier from the frontline in Lashkar Gah, told Xinhua on condition of anonymity that the Taliban insurgents have tightened the noose to overrun Laskhar Gah, the key city in south Afghanistan.

Similarly, an Afghan army helicopter crashed in the northern Baghlan province on Sunday and all seven aboard died, a statement of defense ministry said. However, Taliban purported spokesman Zabihullah Majahid in contact with media claimed that the militants shot down the chapper.

Amid intensifying conflict in Afghanistan, 80 police surrendered to Taliban in Balamirghab district of the western Badghis province on Friday, a local official told Xinhua on condition of anonymity.

However, Badghis police chief Mohammad Rauf Taj, when approached by Xinhua, said 48 police after four days of besieging by Taliban militants in Marichaq area of Balamirghab, have gone missing.

Taliban militants fighting the government to regain power have intensified activities over the past couple of months and made advancement in the northern Kunduz and southern Helmand provinces.