You are here: Home / West Asia / Afghan base falls to Taliban and Police surrender to insurgents after three-day battle 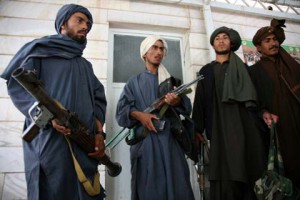 The Taliban took control of a large police base in a remote part of northeastern Afghanistan after about 100 police and border guards surrendered and joined the insurgents after three days of fighting, security officials said Sunday.

The loss of the Tirgaran base in Badakhshan province late Saturday marked the largest mass surrender since U.S. and NATO forces concluded their combat mission at the end of last year. It highlighted the challenges facing Afghan security forces, which have seen their casualties soar in the face of stepped-up insurgent attacks.

“No reinforcements were sent to help the police at the base for the past three days when they were under the attack, and finally they had no option: They had to join the Taliban,” said Abdullah Naji Nazari, the head of Badakhshan’s provincial council.

Jan said the local police commander also joined the Taliban and handed over the base’s weapons and ammunition.

The Taliban issued a statement saying they captured the base along with 110 police officers, their local commander and the head of the local border police. It did not say whether the captives joined their ranks.

Jan later said the Taliban had released all the policemen and allowed them to return to their homes. He said it was unclear why the forces surrendered, adding that they had enough ammunition and supplies to hold out for weeks.

Elsewhere in Badakhshan, the heavy rains have left at least six people dead, including women and children, in Kofab district, said Nawid Frotan, the spokesman for the provincial governor.

About 130 houses had been damaged or destroyed, and authorities were trying to send food and other relief to those stranded by rising waters, he said.

Perdili said the vehicle had 18 passengers, all members of the Shiite Hazara minority. Four women and one man were freed, and authorities were still negotiating the release of the others, he said.