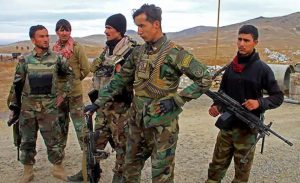 At least 134 Taliban fighters were killed in armed clashes with the national army in 10 provinces, said a statement issued by the ministry of defense on Tuesday. The statement said that another 65 insurgents were also wounded in the clashes took place over the past 24 hours, like reported by menafn.com.

Five militant commanders were among the dead, according defense ministry, which said the operations were launched in the provinces of Zabul, Kabul, Faryab, Balkh, Helmand, Farah, Ghazni, Herat and Kandahar.

Fawad Aman, deputy spokesman at the defense ministry, said that the Taliban launched offensives in 22 provinces over the past 24 hours. The offensive, he said, included firing of heavy weapons, terror cases, ambushes and landmine explosions.

He said that the army soldiers pushed the attackers back in many provinces, however he declined to provide details about army casualties.

In another incident, a local police chief was killed by a roadside bomb in Ghazni province.

Provincial officials said that police chief for the Deh Yak district was killed on his road to an operation that a roadside bomb hit his vehicle.