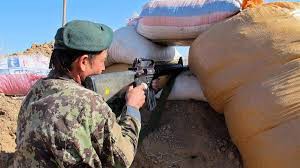 Begin in Afghanistan, where government troops are engaged in heavy fighting with the Taliban, to prevent a key district in the southern province of Helmand from falling into militant hands. Britain also says it has sent military personnel to the province.

The Taliban have been getting closer to taking full control of the Sangin district in Helmand province, with most government buildings now in their hands.

“The situation is very bad here. Local residents are at risk and can not stay in their homes because the enemy is firing on them.”, Jamal Uddin, an Afghan soldier said.

There are conflicting reports as to who controls the district. Afghan officials say government forces are struggling to hold the police headquarters, adding that military planes have dropped food and ammunition to the besieged Afghan forces, and that reinforcements have been deployed.

With the province on the verge of falling into Taliban hands, Britain says a small number of personnel have been deployed to Helmand.

“What we have got in country is some 450 British Armed Forces personnel. Most of them are in and around Kabul running the officer training academy. We also got some advisors at Camp Shorabak, that is just adjacent to Camp Bastion, which we have all known such a long time, monitoring and advising Afghan forces. So don’t let’s get too hooked up on the fact that there are British special forces there.”, Lord Dannatt, former head of British army said.

The Afghan Interior Ministry confirmed the deployment, saying the British forces would help advise Afghan security forces in technical and other issues.

“A group of British troops have been deployed to Shorabak in Helmand to participate in the Resolute Support Mission. They will support and help Afghan security forces as advisors and they will not participate in the military operations.” Sediq Sediqi, who is the Afghan Interier Ministry spokesman said.

Sangin has fallen to Taliban control several times since British troops withdrew from Helmand in 2010. And the fighting over the last 6 months has caused significant casualties among Afghan and international forces.