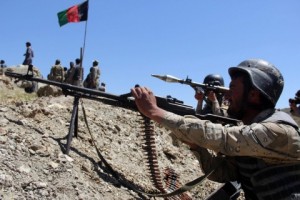 The incident took place late on Thursday after the Afghan border guards opened fire on a number of militants who were trying to enter the district from the other side of the line.

Provincial police spokesman Zia Durani confirmed that a border policeman lost his life and two others were wounded during the clash.

He said the Pakistani border guards opened fire on the Afghan police forces after the militants came under fire.

According to Durani, the militants and Pakistani militia forces have likely suffered casualties during the clash but there are no reports regarding the number.

The militant groups and Pakistani authorities have not commented regarding the incident to so far.

Incidents involving cross-border attacks mainly by the militants are not rare as the porous areas along the Durand Line are normally frequented by the Afghan militants as well as the foreign insurgents including the Pakistani Taliban insurgents.

The Afghan and Pakistani forces have also clashed for numerous times along the Durand Line last year, mainly in eastern and southern provinces.