A strategically important district in the southern Afghan province of Helmand that has been besieged by the Taliban for more than a week remains under government control after the United States conducted two air strikes, officials said. 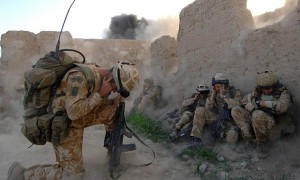 Fighting continued, Afghan officials said, after insurgents captured the area around the district governor’s compound overnight but were pushed back, said Akhtar Muhammad, a police commander in Sangin.

“An hour later we recaptured that building and now we have it,” he told The Associated Press.

The United States military conducted two air strikes “in the vicinity of Sangin,” according to the spokesman for the NATO mission in Afghanistan, US Army Colonel Mike Lawhorn.

The spokesman for the Afghan army in Helmand, Guam Rasoul Zazai, said that Afghan military air strikes had also bombarded Taliban strongholds in Sangin, killing 25 insurgents and wounding another 12.

Operations were slowed as insurgents began taking shelter in civilian homes, he said.

A Taliban claim that they had the district under their control was widely refuted. Taliban statements regularly exaggerate battlefield gains, though government casualty figures are also impossible to verify.

Sangin is an important prize for the Taliban. It sits on crucial smuggling routes for drugs, arms and other contraband which fund the insurgency.

Insurgents have been fighting for control of Sangin for almost a month, though the battle intensified a week ago as government reinforcements failed to arrive and Afghan security forces were pinned down inside an army base.

Shadi Khan, a tribal elder in Sangin who is also director of the Sangin District Council, said he was trapped in the base for three days before government forces arrived.

“Taliban rumors that they have captured the district are not true,” he said.