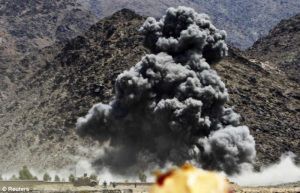 At least 16 militants were killed in an airstrike conducted in southern Helmand province of Afghanistan, the Ministry of Defense (MoD) said Tuesday.

The airstrike was carried out in the restive Greshk district of Helmand province, MoD added.

The ant-government armed militant groups have not commented regarding the report so far.

This comes as at least 14 militants were killed and 11 others were seriously wounded in an airstrike conducted close to Lashkargah city, the provincial capital of southern Helmand province.

The Ministry of Defense (MoD) said Monday that the airstrike was conducted in the past 24 hours but did not elaborate further.

Helmand is among the volatile provinces in southern Afghanistan where the Taliban insurgents are actively operating in a number of its districts.

The group has launched numerous attacks in this province during the year with the local officials saying that the growing raids were aimed at establishing a council in this province.

However, the officials said the Afghan forces managed to repulse the Taliban attacks and thwarted their plans to shift some of their leadership council members to Helmand.