You are here: Home / MidEastGulf / Advanced Russian APCs among arms deliveries to Syria 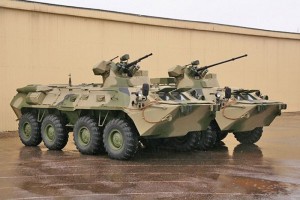 Russia says its military assistance to Damascus is aimed at helping it fight terrorism in Syria, but the West suspects Moscow is building up its military presence on the ground in Syria to prop up its long-time ally, Syrian President Bashar al-Assad.

Kommersant said its report was based on information from unnamed sources in the defence export sector.

It also quoted the sources as saying Syria had previously paid Moscow advances towards the purchase of Russia’s sophisticated S-300 air defence systems. It said Moscow later decided not to deliver the missile systems for now and has been delivering the other arms instead.