You are here: Home / Mediterranean / Adm. Credendino and Libya: Al-Qaida and AQIM are assessed to be financially exploiting human smuggling routes 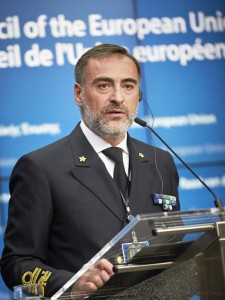 Libya’s coastal cities are making millions of euros each year from people smuggling, the commander of a European Union military task force in the Mediterranean Sea says in a confidential report.

In a report to the EU’s 28 nations, Rear Adm. Enrico Credendino warned that “migrant smuggling, originating far beyond Libyan borders, remains a major source of income among locals in Libyan coastal cities generating estimated annual revenue of up to 275 to 325 million euros ($292 million to $346 million).”

The report, issued to EU member states Wednesday and obtained by The Associated Press, illustrates how much the flow of migrants toward Europe is a central part of the economy in war-torn Libya.

The report provides no details on how the figure was calculated and EU officials didn’t immediately respond to questions by email or phone Thursday. Tens of thousands of migrants leaving Libya in unseaworthy boats have been picked up in the Mediterranean this year, however, often telling aid workers of the hundreds or thousands of euros they had to pay smugglers in Libya.

The report assesses the work of Operation Sophia, a naval mission intended to stop the flow of migrants to Europe, between Jan. 1 and Oct. 31.

Credendino noted in the report that Islamic extremist groups are among those involved in the smuggling business, which sometimes begins far south in Africa’s Sahel zone.

“Al-Qaida and Al-Qaida AQIM (Al-Qaida in the Islamic Maghreb), aligned with the Tuareg tribe in southwestern Libya, are assessed to be financially exploiting these smuggling routes,” he said.

He added that there was no evidence extremists were trying to enter Europe via the dangerous Central Mediterranean route that passes from Libya to Italy.

The International Organization for Migration estimates that 4,690 people have lost their lives this year trying to cross the Mediterranean into Europe.

Operation Sophia has recently begun training dozens of Libyan coast guards in the hope that they will be able to stop smugglers closer to Libya’s coast, where the EU mission is unable to operate for legal reasons. Credendino said an effective Libyan coast guard would be able to save more lives.

Libya’s economy has suffered badly since the 2011 ouster of longtime dictator Moammar Gadhafi plunged the country into chaos.