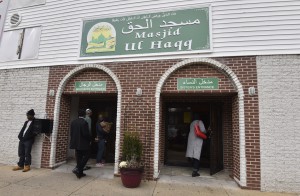 Maalik Jones had long wanted to move to an Islamic country, those who know him say. But his wife, who had come to America from Morocco to marry him, refused to accompany him. So when the West Baltimore man finally went in the summer of 2011, he traveled alone.

To his wife, it was as though he disappeared.

Last week, authorities tried to fill in some details. The FBI said Jones had made his way from New York through Morocco and Kenya to semi-lawless Somalia. It was there, the FBI said, that Jones linked up with the terrorist group al-Shabaab.

He allegedly fought for almost four years as part of a militant commando team, and authorities say he participated in an attack on a Kenyan army outpost last June in which two Kenyan soldiers were killed.

Jones, 31, was indicted last week on charges of providing material support to a foreign terrorist organization, conspiracy to provide material support, financing terrorism and making false statements. He has pleaded not guilty to all charges, and is being detained in New York.

Now family, friends and community leaders back home are left to piece together what happened to the young man.

Jones, who was raised in the heart of African-American Muslim community in the West Baltimore neighborhood of Upton, grew up at a time of transition for young black Muslims as they sought to find their place in the religion of their parents. The process led some to seek opportunities to learn about their faith at home, and others to go overseas to study.

Jones’ family owned a home where Division Street crosses Islamic Way. Jones reported in court documents that he lived in the house, which is just around the corner from a mosque, for most of his young life. He was educated at the Islamic Community School, a K-12 private school in a storefront on West North Avenue that claims to be the nation’s oldest institution of its kind.

Hakim Lucky, a leader at Masjid ul-Haqq — the mosque nearby — said the Jones family is among the largest in the community and has connections by marriage with many more.

“They’re not radical extremists,” Lucky said. “Nobody would have expected this.”

Jones was arrested by Somali authorities in early December as he tried to find a boat that would take him north to Yemen, the FBI said. He was flown back to the United States later that month and secretly brought to court in New York. He made another brief appearance on Wednesday.

His attorney, Irving Cohen, said he was looking forward to reviewing the evidence.

“It is what it is,” he said. “We intend to go ahead and fight these charges.”

Jones was charged in 2008 with child abuse and assault over a series of beatings he allegedly dealt a nephew one weekend. In the first beating, Jones allegedly took the boy down to the basement of the Division Street house and struck him with a piece of wood.

On Friday, worshipers greeted each other outside Masjid ul-Haqq, a long, wide two-story building painted yellow on one side and cream on the other.

Inside, they assembled on the mosque’s upper floor — men in front, women in back — to hear Lucky lead a service. They bent down as they prayed along diagonal strips of green carpet that guided their heads east toward the holy city of Mecca.

“The average Muslim here in this community is not of the jihadist type,” Lucky said in an interview.

But among African-American Muslims in Baltimore, Lucky said, there has been increasing interest in moving overseas to live and study in an Islamic country, to gain a fuller understanding of the religion.

Some come back better equipped to take on leadership roles, Lucky said, but he warned that the practice also carries risks.

The students, some of whom are traveling for the first time, with little knowledge of Arabic and no experience in the developing world, can become disillusioned with what they find. That can make them vulnerable to recruiters for radical Islamists.

“You go to the wrong place, you get indoctrinated in the wrong ideology, it can have devastating effects,” Lucky said.

Lucky is raising money to open an Arabic language institute near the mosque. He hopes that engaging with the Quran, Islam’s holy book, the sayings of the Prophet Muhammad and other texts in their original language will foster “independent thinking in individuals so they won’t be exploited.”

A local institute would give young Muslims a place to study Arabic and Islam at home.

Lucky needs $10,000 to buy a building from the city and more money to renovate it. He said he has native speakers lined up to donate their time to teach classes.

Muslim communities across the country are making similar plans.

“These communities are looking for ways to be trained here,” said Zain Abdullah, a professor of religion and Islamic studies at Temple University in Philadelphia.

Part of the motivation, Abdullah said, is to develop an American form of Islam. But there’s also a wariness of having to rely on outsiders for instruction.

“They know the kind of indoctrination that someone can bring in,” Abdullah said.

Lucky said he didn’t know Jones well enough to know why he dropped his life in Baltimore and traveled overseas. He added that only very few who go end up joining a militant group.

Khlifi came to Baltimore from Morocco in 2005 to marry Jones. The couple had two children. Khlifi said her husband never told her where he was going or what he planned to do.

When he left, their son was 4 and their daughter was just 2 years old.

While his wife struggled, the FBI said, Jones linked up with al-Shabaab and began his education in militancy.

“The training included, among other things, prayer, reading and interpreting the Koran, physical exercise, and weapons handling,” an FBI agent wrote in a complaint against Jones. “During the training, Jones learned how to shoot firearms, including the AK-47 assault rifle, and how to operate a rocket-propelled grenade.”

Al-Shabaab emerged in Somalia a decade ago from an insurgent group that fought against a fragile transitional government. In 2012, the group’s leaders publicly aligned themselves with al-Qaida and expanded the conflict into neighboring Kenya. It claimed credit for killing 72 people in an attack on a shopping mall in 2013, and 148 more in an attack at Garissa University College last year.

The FBI said Jones was assigned to Jaysh Ayman, a commando unit that carried out cross-border raids. Jones told investigators he was paid $100 a month as a fighter, the FBI said.

Jones was injured by a missile during a battle with Kenyan forces, the FBI said, but returned to his unit after being released from the hospital.

In videos recovered from a slain al-Shabaab fighter, Jones is seen celebrating with other militants and nodding along as a leader denounces their enemies in a sermon while they prepare for an attack.

“The Kenyans are crying like young children,” the man proclaims, according to the FBI. “Their hearts are filled with fear. … Glory be to God.”

In the early hours of June 14 last year, the FBI said, Jones and the other men in the video launched a raid on a Kenyan military camp, firing RPGs and rifles and killing two soldiers.

Kenyan media reported that the terrorists overestimated their strength and lost 11 fighters, among them a British man who had left his home to join al-Shabaab and the man who had delivered the sermon.

Jones survived and stayed with the group for several more months, according to the FBI.

It’s not clear what prompted him to leave. On the day the FBI said Jones was captured, a Somali official told reporters that they had detained a Maryland man identified as “Abdimalik Jones.”

The official told reporters the man had been involved in a dispute with some of his comrades, was trying to cut his ties to al-Shabaab and wanted to return home.

Another Somali official put a Maryland man identified as “Malik John” on the phone with a Reuters reporter.

“I decided to leave them two months ago,” the man said. “I hated them because I found their ideology was totally wrong.”

While Jones was allegedly fighting for al-Shabaab, Khlifi was trying to divorce him.

She filed papers just over a year after the FBI said he left the United States. Khlifi had never worked, she wrote in the court documents, and was getting by on public assistance — the monthly checks amounting to $453.

A judge denied Khlifi’s request to waive the court fees and closed the case. In 2014, she tried again with the help of a lawyer. Process servers set out across the city to try to serve the court papers on Jones but couldn’t find him.

“I was informed by defendant’s mother Mrs. Candice Jones, that her son had moved about two years ago and maybe out of the country,” one server wrote after a failed attempt.

A judge ultimately closed that case. Now Khlifi is trying a third time.