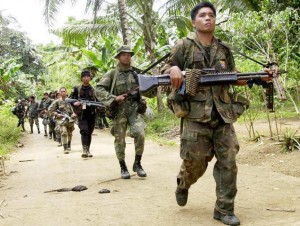 Two Philippine soldiers have been killed and three others wounded in bomb attacks by Abu Sayyaf militants in a southern province, the military said Wednesday.

The bombings came a week after a pipe bomb killed a soldier and wounded eight others on Basilan, one of the southern island provinces where the militants operate.

The first blast Tuesday morning killed two soldiers and wounded two others while they were on a road patrol in Sumisip township, a military report said. Another soldier was wounded during a gunbattle between troops and about seven militants following the second blast in Tipo-Tipo municipality. No one was hurt in the third blast in Lamitan city close to midnight.

The military believes those involved in the bombings belong to an Abu Sayyaf faction led by Furuji Indama, who is suspected of providing refuge to Malaysian terror suspect Abu Anas, according to spokesman Lt. Col. Harold Cabunoc.

Anas may have trained the militants who attacked a military convoy last week in Tipo-Tipo, said Lt. Col. Cristobal Paolo Perez, an army commander in Basilan.

The militants, numbering around 400 and operating in small bands, have turned to ransom kidnappings, extortion and other crimes to survive U.S.-backed military offensives.

The Abu Sayyaf is one of several Muslim rebel groups in the southern region of the predominantly Christian nation. The biggest rebel organization and the government have signed a peace accord that grants broader autonomy to the minority Muslims, but the militants have been excluded from the negotiations.